All my talk of cocktails in my ‘Bloody Mary’ Tortilla Soup post gave me the urge to splurge on new (to me) vintage tiki mugs. I’ve thought better of purchasing anything beyond the basics since we moved into the RV – simply because there is nowhere to put anything. But now that we’re moving out of the Gypsy Roller and into a real house (next week hopefully!), I’ve given myself permission to acquire a few new tchotchkes. On the recommendation of my blogger buddy GiRRL_Earth – herself a 1950s vintage hound – I went shopping on Etsy, which turned out to be a great source for tiki stuff – although many sellers, to my dismay, don’t ship to Canada. After much perusing and ogling I finally settled on this guy. From there I went over to Ebay and picked up this fierce twosome. Once they arrive in the mail I plan on busting out the Polynesian tunes and celebrating with a Mai Tai or two.

Anyway, on to the food. When I posted my Fragrant Breakfast Lentil Bowl with Apples, Golden Raisins and Indian Spices back in October I wasn’t sure how it would go over. For most people in the Western World lentils are mostly the stuff of stews, soups and chilli; in other words, we generally don’t consume them before noon. So while I really enjoyed the recipe, I didn’t expect anyone to join me on the lentils-for-breakfast bandwagon. But surprisingly (to me, anyway) this recipe gets viewed far more than anything else I’ve posted to date! Rather than a breakfast lentil bowl being an whacko idea, it looks like I was on to something!

Given the relative success of my first lentil bowl, I figured it would be neat to come up with a completely different version. Like the original recipe I use red lentils, which are more tender when cooked than other lentil varieties and have a shorter preparation time. In the new version I incorporate the flavours of a bumbleberry pie – juicy blueberries and strawberries, sweet apple, cinnamon, nutmeg, allspice and a touch of brown sugar. If I’d had blackberries on hand I would have included these as well. Next time!

I must admit I’m on a cashew-cream kick, having figured out recently how easy it is to make the stuff. My last recipe featured a savoury version, and at the risk of committing cashew-cream overkill I whipped up a sweet version and used it to top my bumbleberry lentil bowl. It functions much like a dollop of vanilla ice cream – but without the guilt that might result from eating ice cream in the morning. The lentil bowl is tasty in itself, but I highly recommend you try it with the cashew cream. It’s a simple recipe and can be prepared the night before. 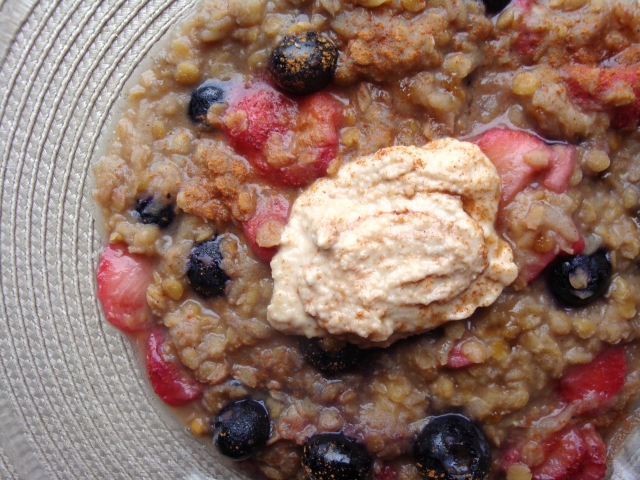 Tip: If the concept of lentils for breakfast is just too weird for you, you could easily make this recipe using old fashioned rolled oats. Just reduce the cooking time a little.

Prepare vanilla cashew cream: Place cashews and 1 cup of water in a bowl. Place in fridge and let soak for two hours. Drain cashews and transfer to blender along with remainder of ingredients. Pulse until smooth, scraping down the edges of blender with a spatula as needed. Set aside until needed.

Prepare lentil bowl: Place berries in a small bowl and toss with brown sugar and lemon juice. Set aside. Place lentils, grated apple, almond milk, water, spices and salt in a medium saucepan. Cover and bring to a gentle boil. Reduce heat and let simmer, partially covered, for 20 minutes or until liquid is fully absorbed and lentils are tender. Gently fold in berries and let warm through – a couple of minutes.

Serve, topping each portion with a dollop of Vanilla Cashew Cream and a sprinkle of cinnamon and/or brown sugar. Eat!

HELLO and welcome to GRVK! I started this blog when I was living in an RV - that's correct, a recreational vehicle (whom we named the Gypsy Roller) - with my boyfriend and our son. We now live in a 'normal' house - in the Fraser Valley region of beautiful British Columbia - and it's here where I create the tastiest of mostly vegan recipes for this blog. If you like what you see, please click the 'follow' button below! You can also find me on Twitter, Facebook and Pinterest.

When I'm not cooking I enjoy reading, listening to the CBC, thrift store shopping, reminiscing about the 1980s, drinking coffee and dancing with my toddler son.